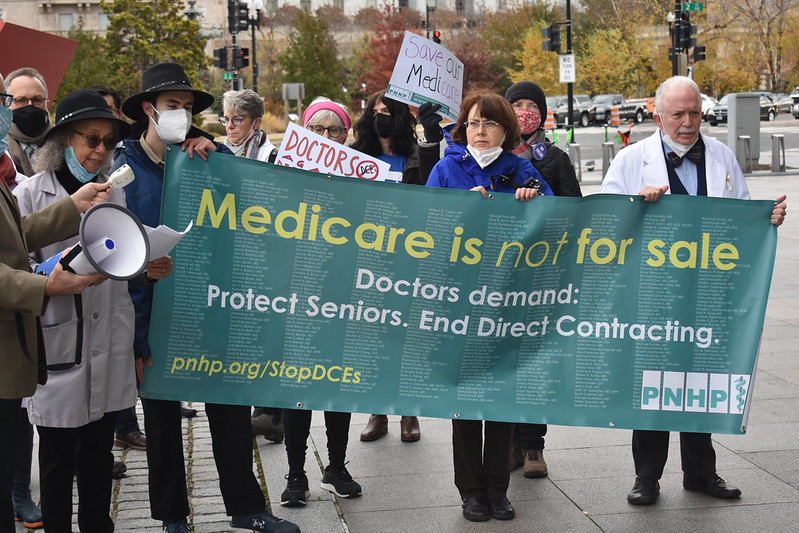 The Biden administration is hearing mounting calls to end a program that advocates warn will radically transform Medicare.  At the same time, the administration is getting counter pressure from the health care industry that sees a sudden threat to the potentially lucrative plan.

As recently as early December 2021 the program, known as Direct Contracting, wasn’t on the radar of most Medicare beneficiaries or members of Congress.  Rep. Pramila Jayapal (D-WA) called it the “biggest threat to Medicare you’ve never even heard of.”

But by early January more than 54 lawmakers had joined Rep. Jayapal in signing a letter urging Human Services Secrectary Xavier Becerra to permanently end the controversial program.  Direct Contracing, the letter said, would maximize the profits of new fiscal intermediaries while limiting the care options of the 38 million beneficiaries of traditional Medicare, which now offers free choice of any doctor or hospital.

In early February, in response to the growing opposition to the program, the National Association of ACOs sent Secretary Becerra a letter imploring him to simply “adjust the model” rather than cancel it.  Abandoning Direct Contracting, the industry group warned, would undermine efforts to “achieve the triple aim of better patient satisfaction, higher quality care, and more affordable care.”

Quickly responding to Becerra with its own letter, Physicians for a National Health Program (PNHP), which represents 25,000 health professionals and has spearheaded the opposition to Direct Contracting, said that immediately pulling the plug on the program would be in the best interests of Medicare beneficiaries.

Initiated under President Trump but continued by President Biden, Direct Contracting would insert middlemen — Direct Contracting Entities (DCEs) — between traditional Medicare beneficiaries and their medical-care providers. Like Medicare Advantage plans, DCEs — most of which are investor-owned with ties to commercial insurers — would receive a monthly payment for a specific group of patients.

The Direct Contracting “pilot” program affects Medicare beneficiaries in 38 states, Washington, D.C., and Puerto Rico, potentially covering 30 million of the those in traditional Medicare. Fifty-three DCEs have already signed contracts to be the fiscal intermediaries between patients and their providers.

“Direct contracting is nothing more than privatizing Medicare,” charged Alex Lawson, Executive Director of the advocacy group Social Security Works. “It inserts a corporate bureaucrat between a patient and their doctor in order to deny care and make Wall Street money. The Biden administration must completely eliminate Direct Contracting — nothing less than that is acceptable.”

Health care companies and providers that are banking on Direct Contracting’s continued rollout don’t see things quite that way.  “This is not the end of traditional Medicare, as advocates have falsely claimed, but is a way to provide additional beneficiary and provider tools as part of a whole-person care approach,” they said in their letter to Becerra.  The letter's signatories urge Becerra to “make necessary refinements” to Direct Contracting rather than scuttle it.

“For example,” the group writes, “you can limit participation to certain types of DCEs, such as provider-led DCEs, and place additional guardrails and add more beneficiary protections.”

PNHP countered that as long as the program provides a profit motive for DCEs, they will find a way around proposed “guardrails.” “Our experience from Medicare Advantage (MA) shows that when regulators install new guardrails that threaten profits, the industry will simply build a bigger truck to run them over,” the advocacy group told Becerra.

Now it is up to Becerra and the Biden administration to decide whether Direct Contracting is a path to better and more affordable care, as its backers claim, or an exit ramp for the Medicare program most beneficiaries know and love.

For the National Association of ACOs’ letter to Becerra, click here.

For Physicians for a National Health Program’s letter, click here.

For the congressional sign-on letter on Direct Contracting, click here.

For our earlier coverage of Direct Contracting, click here.